How to conduct a safety critical task analysis

What is a safety critical task analysis

A safety critical task analysis(SCTA) is a specific form of task analysis that looks at tasks that have potential to be a major accident hazard. It focusses on not just how things may go wrong, but more importantly on how to ensure that these tasks are carried out correctly when called for.

SCTAs tend to come in all shapes and sizes. This is in part because of the range of sectors which use them; oil and gas, chemical processing, nuclear and aviation to name but a few. The personnel aren’t uniform either; they might be done by human factors consultants, HSE managers, process safety engineers, operations managers or someone chosen ad hoc because they seem like the the right person.

The SCTA process and reporting format varies greatly too. We’ve even seen organisations who have several SCTA processes across different sites. Though, more often than not, SCTAs are conducted using generic software such as Excel, Word and the like.

The problem with Excel SCTAs

Whilst it may seem like generic office software achieves the desired results, there are a multitude of potential failures – IHF has previously encountered a company which was working on two versions of the same task analysis, because one was saving to their desktop and the other was saving to the cloud.

On another occasion, a company was asked to produce its safety critical task analyses in advance of an HSE inspection. The company was using word documents, spreadsheets and diagrams so each SCTA had many files, but the company hadn’t kept the files organised. It took an unnecessarily large amount time to piece them all together before sending to HSE.

These apparent issues with carrying out SCTAs can sometimes encourage organisations to attempt to use less rigorous methods of assessing risk. For example a British Airways aircraft was returned to service in 2004 in an unsafe state. Specifically, an access panel was missing from a fuel tank after it was removed to improve lighting. Effective SCTA would have identified the lack of light as a potential issue, and recommended mitigations that could have prevented the incident. Again, nobody was hurt on this occasion, but the aircraft in question lost at least 37 tonnes (around 45000 litres) of fuel through a combination of fuel lost to the leak and fuel that was required to be jettisoned, along with the not inconsiderable costs associated with cancellation of the flight, and the much harder to calculate cost of reputational damage.

How do to a STCA with TASC?

IHF’s software, TASC, addresses all of these problems and more. It’s clear, user-friendly interface is designed to walk users through the SCTA process in its entirety, with powerful tools used to carry out task screening to ensure that time is not wasted carrying out analysis of tasks that carry only minimal risk.It’s task analysis feature helps to ensure that the tasks is broken down into appropriate steps, and allows organisations to gain an understanding not just of how tasks should be carried out, but much more usefully, how they are carried out. This has many benefits – other than the obvious potential benefit in risk reduction, it can also help to identify effective and safe user knowledge that can be shared organisation wide, reducing costs and increasing productivity. 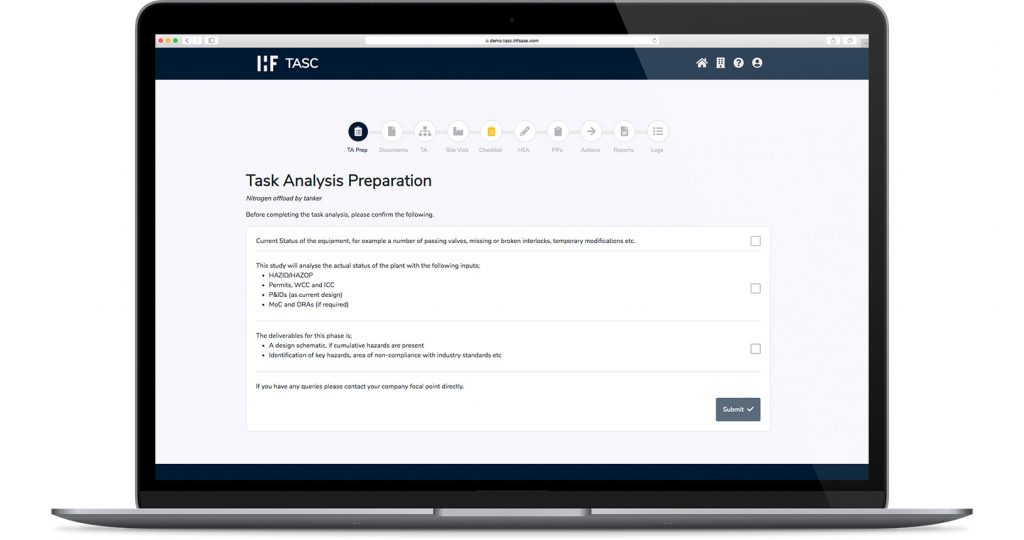 Most importantly of all however, its Human Error Analysis tool is designed in such a way as to allow all potential human errors associated with each subtask to be identified, along with additional factors that may increase – or decrease – the likelihood of the failure. It allows users to identify safeguards that can be put in place, along with mitigations that can be used to improve the outcome should the worst happen. It does all this in a clean, streamlined manner aligned with guidance from both the HSE and the Energy Institute – helping to improve audit outcomes in the process.